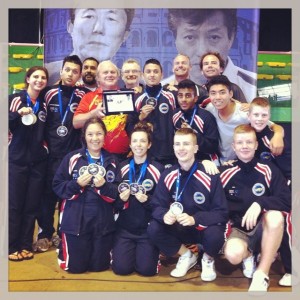 We have had limited access to the internet, and our key photographers and video people are still travelling, but the news is that the Australian team was very successful in Rome. The highlight was the success of the Australian junior male and female teams. Both teams won silver medals in team sparring, and faced Argentina in the final. Luke Ravlic, Alec Kumar and Hashira Weerawardena fought in the junior male team, while Quniton Le and Ashley Ravlic won silver medals in individual sparring – awesome work!! Mary Pirozek did a great job in the junior female team, and our adult female, Sanja Stapar won bronze in her two individual events, sparring and patterns. The veterans also brought home some medals, and everyone, medallist or not, put in a superb effort often against far more experienced opponents. We also had a World Cup gold medallist in sparring, the one and only Cooper Ravlic! Congratulations and a huge huge thank you to Master Cariotis for his years and years of building us as martial artists, and the last 12 months of training us for Rome. Thanks also to John Ravlic and Yogi Kumar for being our coaches.We also had a wonderful team of supporters – our juniors could not have been here without the support of their families, and none of us could have been here without the support of the students of USMA who are keeping the school alive and kicking while we are all away. 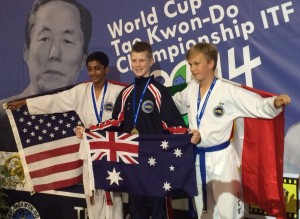